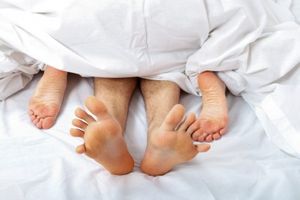 A new study explores differences in sexual attitudes between Baby Boombers, Gen Xers, and Millennials. It finds that Millennials are actually having less sex than their parents, but have more tolerant attitudes when it comes to pre-marital sex and same-sex relationships.

The study, which was carried out by Jean Twenge, a psychology professor at San Diego State University, involved an examination of survey data collected over a 40-year period (1972-2012). Those surveys involved a total of roughly 57,000 people.

Researchers found there were significant differences between various generations when it comes to sex. Baby Boombers –or people born in the 1940s, 1950s, and early 1960s–had an average of 12 sex partners in their lifetimes. Gen Xers, or those born in the late 1960s and 1970s, had 10 sex partners. Finally, Millennials, or people born in the 1980s and 1990s, had an average of eight partners. Of course, researchers had to extrapolate how many partners Gen Xers and Millennials would have over their lifetimes.

Twenge says she was “surprised” by the decrease. But Millennials still have more sexual partners than people born in the early part of the twentieth century, who tended to have between three and five sexual partners in a lifetime.

The study also showed that women are more likely to accept homosexuality. “Perhaps they see it as less threatening than men do,” Twenge said.