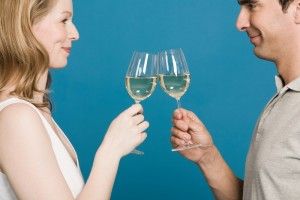 The term “till death do us part” may mean everlasting love and commitment to most. However, it may not pertain to those who hit the bottle frequently.

In fact, excessive alcohol consumption has been blamed for many a split in Western culture, with more severe alcohol abuse causing physical abusive, infidelity, and verbal abuse behind closed doors. That’s why the Norwegian Institute of Public Health decided it was prime time to study the effects of heavy drinking on holy matrimony.

The study reviewed data from 19,977 married couples who participated in a long-term health study that kicked off from 1984 to 1986. At the onset of the study, the couples were asked questions about alcohol use and mental stress within their marriages. Researchers followed up with the same couples periodically, over the next 15 years, noting the divorce rates amongst the group.

Not surprising, it was discovered that more a spouse drank; the higher their chances of ending up divorced—especially in marriages where only one spouse hit the bottle frequently.

“The risk of divorce is estimated to be tripled when the husband’s level of drinking is heavy and the wife’s drinking is low, [versus] couples where both drink lightly,” says Fartein Ask Torvik, study researcher at the Norwegian Institute of Public Health.