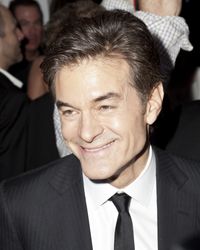 Would you pay $100 per month on an anti-aging remedy that promised to make you look decades younger, reduce wrinkles and body fat, while increasing lean muscle mass, mood, energy, sex drive, and strengthen your bones? Sounds a little too good to be true doesn’t it?

But what if it was touted as an “anti-aging secret” by Dr. Oz?

SeroVital-hgh is the newest, hottest anti-aging breakthrough that everyone’s been talking about—thanks to Dr. Oz. The television doc creating a frenzy around the product after he asked the question, “How many of you want to start feeling 20 years younger right now?”

Even though Dr. Oz doesn’t endorse particular products, he featured the research behind SeroVital-hgh as well as the significance of human growth hormone (HGH) on his show. The doc linked the products as a way to stimulate the body’s production of HGH, an effective way to reduce wrinkles, boost energy, increase lean muscle mass, decrease body fat, recharge sex drive and make you appear not years, but decades younger—and without expensive prescription injections.

The study Dr. Oz referred to on his show was revealed at the Obesity Society’s prestigious 30th Annual Scientific Meeting in San Antonio, Texas. The findings showed that the oral amino acid compound was capable of increasing bioactive, serum (blood) growth hormone levels by a mean of 682% in male and female test subjects across varied age ranges. This same amino acid blend is now sold under the trade name SeroVital™-hgh from SanMedica International™.

“Dr. Oz has an influence on people’s health decisions,” says Chantelle Daines, Media Consultant for SanMedica. “…his sheer enthusiasm for the research behind SeroVital  got people so excited [that] within days of the show airing, we were having trouble keeping it in stock!”

Even though SeroVital-hgh sounds like the fountain of youth, Daines admits that there are negatives, “SeroVital-hgh is not a ‘magic bullet’ but one part of a healthy lifestyle choice including a sensible diet and exercise regimen.”

She also notes that the product costs approximately $100 for a monthly supply and needs to be administered very seriously on an empty stomach—either first thing in the morning without consuming anything for two hours, or at night, at least two hours after your last meal.

SeroVital-hgh is currently being stripped from the shelves at Ulta stores across the U.S., online through SanMedica, and it will also be available at Sephora very shortly.  When you check out at any of these locations and use promo code OZ, you’ll receive free shipping on your SeroVital order!