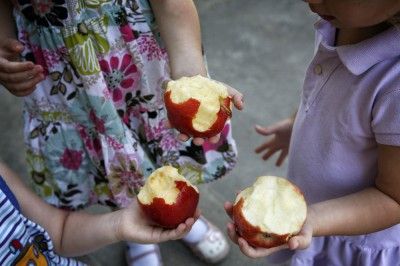 Hate it when the apples you just bought start to go brown and gross? That problem could soon be a thing of the past, thanks to the introduction of genetically modified apples engineered to stay their ideal color.

Genetically modified apples designed to stay green or red have been in development for years but have only recently been given the ‘thumbs up’ by the U.S. Department of Agriculture, which now says it’s OK for two kinds of non-browning apples to be sold in the United States.

According to the Department of Agriculture’s Animal Plant Health Inspection Service, these apples pose no risk to humans or other plants. Still, it could be some time before we see the fruit on store shelves: the apples, which will be marketed as Arctic Granny and Arctic Golden, won’t be available in markets and grocery stores across North America until next year or the year following.

Many of the apples are grown in British Columbia, just north of the Canada-U.S. border. For the company behind the apples, Okanagan Specialty Fruits, it’s a hugely exciting development. “It’s been 57 months and counting for us to get this approval,” says Neal Carter, Okanagan’s president and founder. “It’s a big big day for us.”

The good news is that the apples, though genetically modified, have the same nutritional value of other, non-modified apples. Still, it’s worth noting that the apples are not “brown proof,” meaning they may eventually go brown. But because of their genetic makeup they produce far less of the substance that makes most apples go brown—meaning the Okanagan apples should stay their ideal color for a very long time.