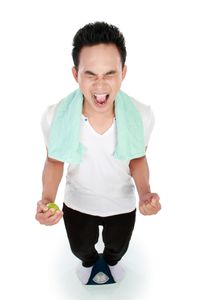 When you overhear a conversation or a health report concerning eating disorders like anorexia and bulimia do you just shrug them off as a “chick problem”?

Both bulimia, the act of binging and purging via vomiting or laxative abuse; and anorexia, the act of food restriction and an irrational fear of gaining weight, are on the rise amongst your gender!  In fact, the social pressure to achieve a sculpted, ripped physique can be so stressful for dudes, that they can suffer body dissatisfaction and even eating disorders almost as easily as women.

According to the National Association of Anorexia, the number of dudes affected by eating disorders worldwide is on the rise. Males currently make up 10 to 15% of those suffering from anorexia and bulimia—but the worrisome part is that men are less likely to seek treatment for an eating disorder because of the shame and social stigma associated with these so-called “woman’s diseases”.

The British National Health Service reports that men currently make up 20% of the million individuals who suffer from eating disorders in the UK.  Not to mention a 66% increase in British hospital admissions for men suffering from eating disorders over the last decade. This new wave of male-specific bulimia and anorexia is even affecting health terminology with terms like “manorexia” cropping up to explain male-specific food restriction!

According to Dr. Ted Weltzin, Medical Director of Eating Disorder Services at Rogers Memorial Hospital, “There’s a lot more pressure today than there was in the past for guys to have and sustain a sculpted body. While women with eating disorders tend to appear emaciated; bulimia and anorexia look quite different in men. In fact, most males affected by an eating disorder are overly focused on obsessive daily exercise and achieving muscle definition.

If you’re worried that you or a man in your life is suffering from unhealthy body image or an eating disorder, please don’t let gender specifics get in the way. Contact the National Eating Disorder Association now.