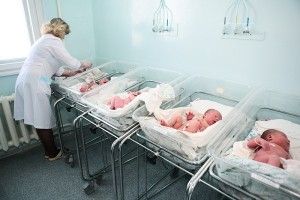 An unfortunate mix-up at Abbott Northwestern Hospital in  Minneapolis has shocked a new mother. Tammy Van Dyke had just given birth to her baby boy, Cody, one day previously when the mistake happened. Hospital workers put him in the wrong bassinette, and he was then breastfed by the wrong mother.

Another mother had recently given birth to another child, Liam, who too was misplaced. She was given Cody to breastfeed just hours before Van Dyke was to be discharged and take him home. The other mother realized something was wrong when the baby’s identification band did not match hers. Cody was brought back to Van Dyke, and Liam was eventually found in another bassinette.

Van Dyke commented on the mix-up. “You put your baby in the nursery, not even 48-hours old, and you think they’re safe. I’m holding it together. I’m just in disbelief, and it was like I was in a dream, a bad dream, and I couldn’t get it to stop.”

Babies wear a wrist band that matches the mothers wrist band, so that these mistakes like this can be prevented. Little Cody will need to undergo a year of blood tests to make sure nothing was passed from the other mother to him. Preliminary testing on both Cody and the other mother thankfully came back negative. The hospital has agreed to pay for all testing up to one year in age.

Van Dyke said that talking with the other mother has helped her deal with the situation. ” It gave me peace of mind to talk to her. She was just as distraught as me that this happened to her, and in the meantime, also didn’t know where her baby was. She has twins.” Liam was found after a 20 minute search. Van Dyke continued, “I will be thankful to God when this year’s over and he’s cleared all his health tests and we don’t have to think about this again.”

The hospital issued an apology to Van Dyke. “Please accept this letter with our sincerest apologies for what occurred today at the hospital, that in the nursery your newborn son was placed in the wrong bassinette and then was taken to the wrong mother and breastfed. The hospital agrees to pay for the additional testing that you had done today and will also pay for the tests recommended for your son related to this incident up to one year.”