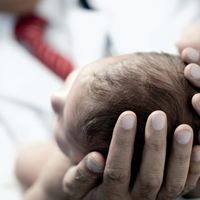 The majority of Amish women typically give birth at home under the care of an unlicensed birth attendant. However, the LaFarge Medical Clinic in Wisconsin is offering expectant Amish mothers a safer alternative—a birthing center staffed by a family doctor and midwife.

Thanks to this low-tech approach to delivering babies—418 Amish women have delivered 927 babies at the birthing facility successfully, even though it lacks an operating room—a mere 4 percent of births were by Caesarean section.

By contrast, nearly a third of babies in the general U.S. are born by C-section, leading researchers to believe that this particular Amish community may hold the key to lowering the overall C-section rates. Consider the study facts:

The study shows that low-tech birthing centers, like this one, can deliver babies successfully and “almost as safely as hospitals,” said Dr. James Ducey, Director of Obstetrics and Maternal Fetal Medicine at Staten Island University Hospital.

While the researchers don’t expect the C-section rate in the U.S. to drop to 4-percent, they do suggest that following these Amish guidelines may safely reduce the national average of C-section births over all.