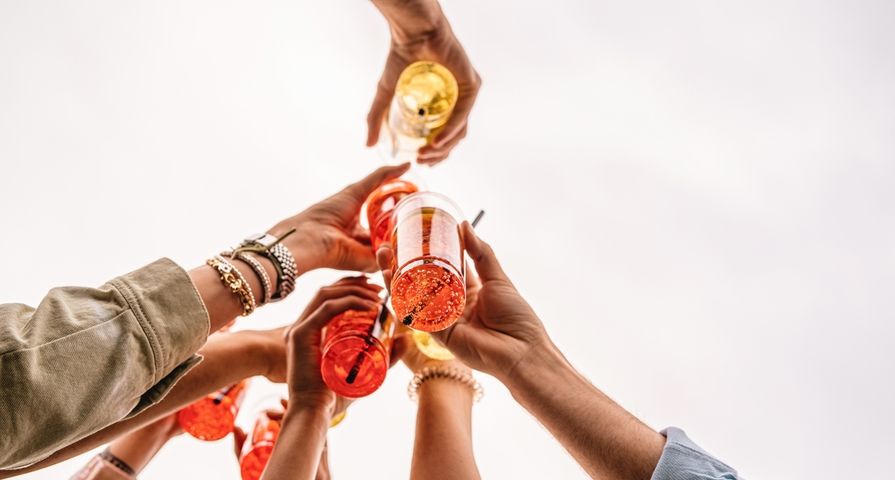 You don’t have to be a master mixologist to throw the best parties in town. As long as you have a blender, a shaker and some ice on deck, you can create all kinds of appealing and great-tasting cocktails. This list contains a selection of the best drinks you can serve up during big parties or cozy get-togethers with the girls. Keep in mind that mixology is a creative endeavor, so feel free to experiment with these recipes and make them your own.

Learn how to make these fun, sweet, and endlessly enjoyable cocktails to wow your friends and provide fuel as you party the night away.

This pink-hued drink is just as strong as a martini but much tastier. Versions of the cocktail have been around since before World War II, but the magic ingredient of cranberry juice wasn’t added until the 1980s when the cosmopolitan was truly born.

With just four ingredients and this easy recipe from Liquor.com, it only takes a few minutes to shake up a cosmo. The instructions call for a lime wedge as a garnish, but you can opt for an orange rind instead to complement the Cointreau if you’re out of limes. 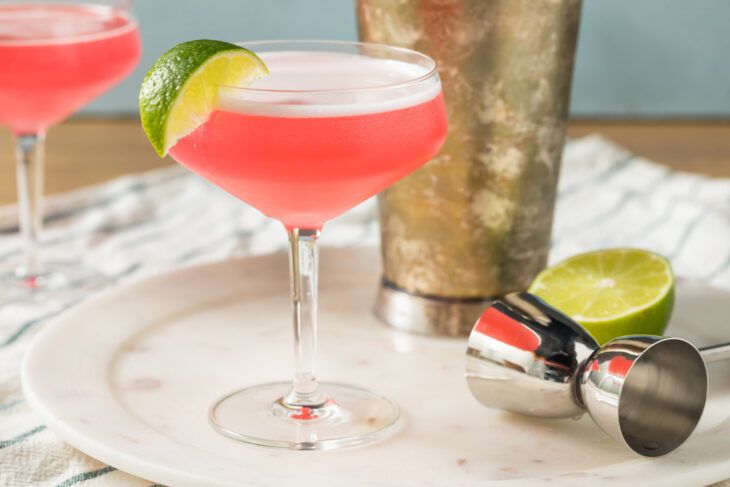 If you’re looking for the perfect summertime cocktail, look no further. This Puerto Rican beverage was invented by a bartender in 1954 at the Caribe Hilton and is a global favorite to this day.

This pina colada recipe from Evolving Table contains just five ingredients, and the best results come when you use a blender, but a long, hard shake works just fine. Garnish with a slice of pineapple, and add a cocktail cherry if you’re feeling lavish. The indulgent combination of pineapple, coconut, and rum tastes so sweet and delicious that it’s nearly impossible to stop at just one. For a pina nolada — the alcohol-free version — simply remove the rum and enjoy. 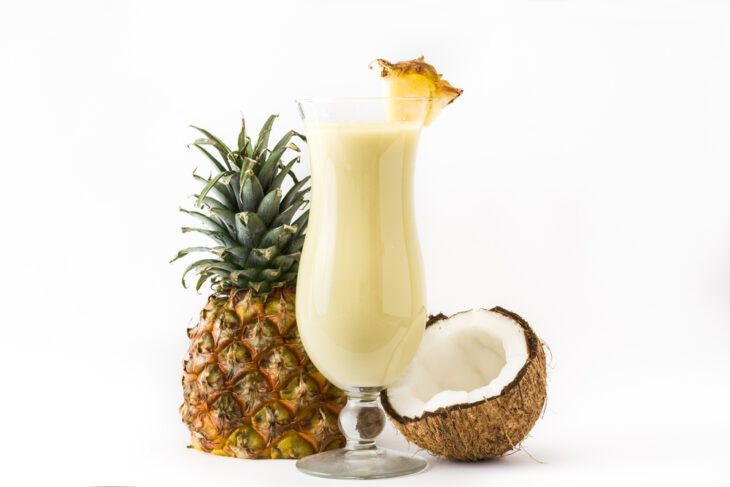 This Californian classic is as cute as it is flavorful, with its name coming from the faded aesthetic that’s reminiscent of a sunset. Legend has it that Mick Jagger of the Rolling Stones popularized the drink after sampling it while on tour in the United States.

Bring the spirit of rock ‘n’ roll to your doorstep by making Tasty’s tequila sunrise at home. With only three ingredients and no equipment necessary, it’s one that you need no experience at all to make. Grenadine is the secret ingredient that provides the sunset look, and a simple cherry and orange wheel garnish make the drink picture-perfect. 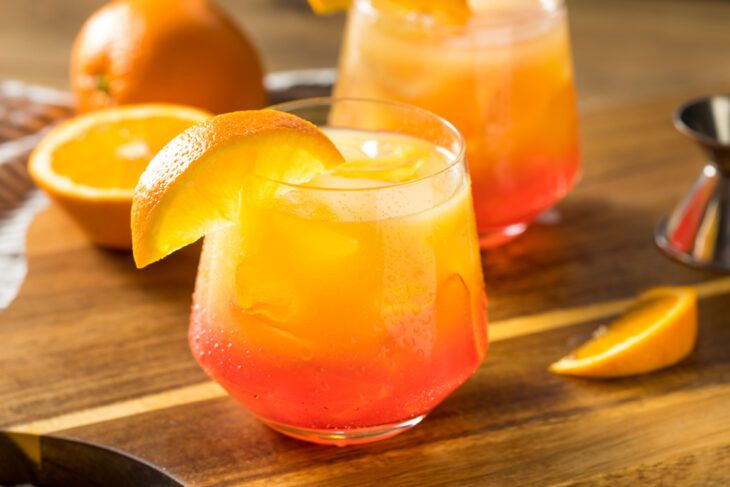 The classic daiquiri has an array of famous followers, including Ernest Hemingway and John F. Kennedy, and dates all the way back to 1896. However, it wasn’t until the 1930s in Cuba that the frozen daiquiri first appeared. Since then, people have been adding their favorite fruits to the mix, and some think that strawberry is the tastiest, like this one from Miss In The Kitchen.

If you have a blender, place the six ingredients in and blitz it, then pour it into glasses. For those looking to improvise, drop the strawberries at the bottom of a cocktail shaker, add the other ingredients and shake vigorously. Serve over a glass full of crushed ice garnished with fresh strawberries and lime. 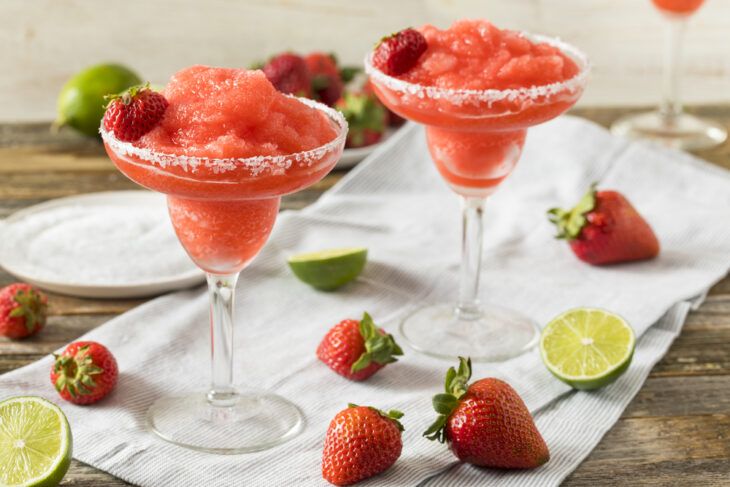 If you’re not a fan of strong drinks, the word ‘martini’ might have you running for the hills. However, the lemon drop (like this one from Foodology Geek) is no ordinary martini. It’s sugary sweet but still packs a kick — although you barely notice the vodka. The pastel-yellow color is charming and makes this mouthwatering cocktail even more appealing.

It’s named after lemon drop candy and first appeared around the 1970s, although the original recipe doesn’t call for the (very affordable and widely available) Italian liquor, limoncello. The addition of this syrupy spirit makes this easy-to-make and even easier-to-drink cocktail the perfect addition to a night of fun and frolics. 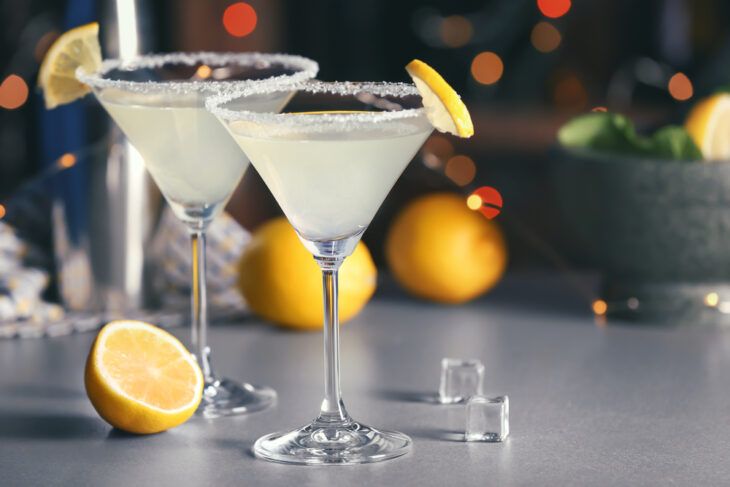 Everyone knows the margarita, and while this drink can be strong, you can add as much citrus and fruity syrup as you want to make it sweeter. You can make the passion fruit syrup yourself as directed in this recipe from A Cookie Named Desire, but it’s easy to find in the store if you prefer. This cocktail is quick to prepare and uses only four ingredients. Garnish with a mint sprig or lime wheel for a delightful drink that spices up the night. 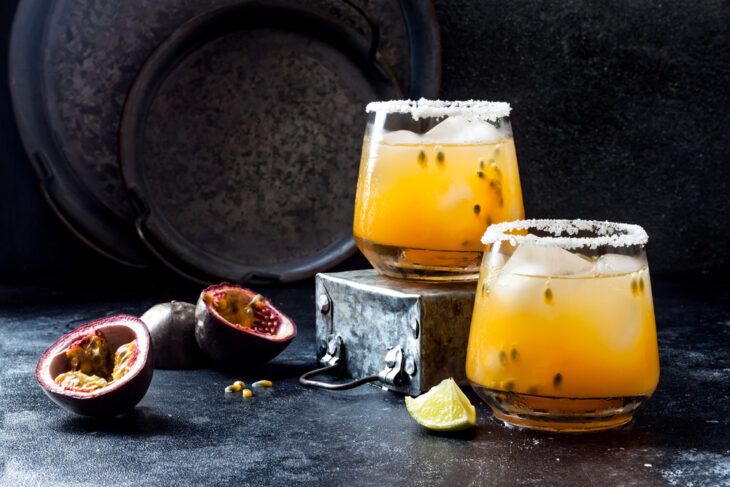 Transport yourself to Hawaii without leaving the house with this scrumptious and simple mai tai recipe from Platings and Pairings. The mai tai has its roots in the 1940s when a Californian bartender’s Tahitian friends exclaimed that his latest concoction was “Maita’i roa a’e,” meaning “out of this world! The best!”

All you need is a cocktail shaker and six ingredients that you can find at a grocery or liquor store. Garnish with cocktail cherries and a chunky slice of pineapple, and sip this sumptuous drink long into the night. Remember, even though it tastes sweet, it has four different liquors in it, so it’s best to sip it slowly. 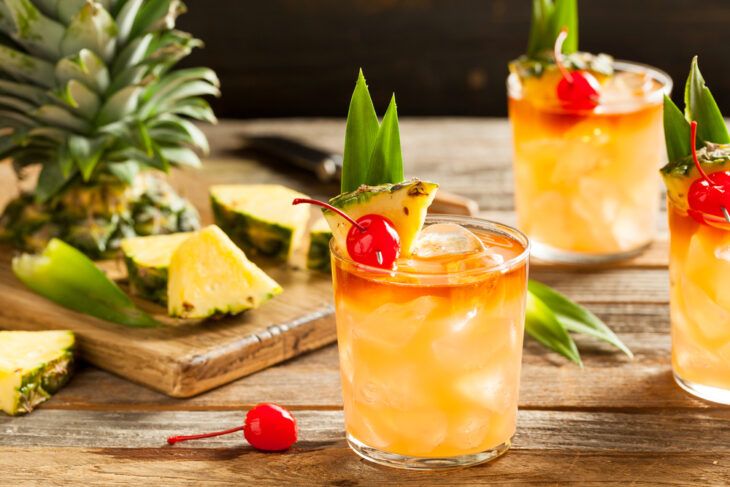 Long Island iced tea, like this one from Vinepair, is a true classic, and one of the strongest drinks you can make. Still, the additions of cola, simple syrup, and citrus juice mask the five liquors well, lending themselves to a luscious sweet-and-sour flavor.

Like many cocktails that are popular around the world today, this one was invented during Prohibition as a sneaky way for rule-breakers to get their fix of alcohol. Garnish with a lemon slice — and don’t be shy about finishing with a cocktail umbrella — and get ready to party. 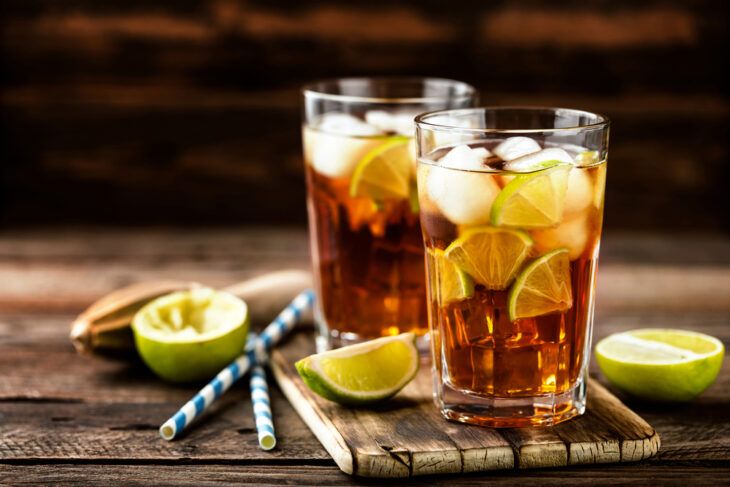 Lovers of simplicity, behold this Kir royale by Inspired Taste. For such a sophisticated-looking cocktail, it’s very easy to prepare. While the original recipe was made with Champagne, any sparkling wine does the job perfectly. Believe it or not, the Kir royale was formulated by a Catholic priest in the French region of Dijon.

With just two ingredients and a garnish, friends who’ve never heard of the drink are likely to ask for the recipe once they’ve sampled a sip. The list of ingredients calls for a fresh raspberry as a garnish, but any of your favorite berries can provide the perfect finish for this cocktail. 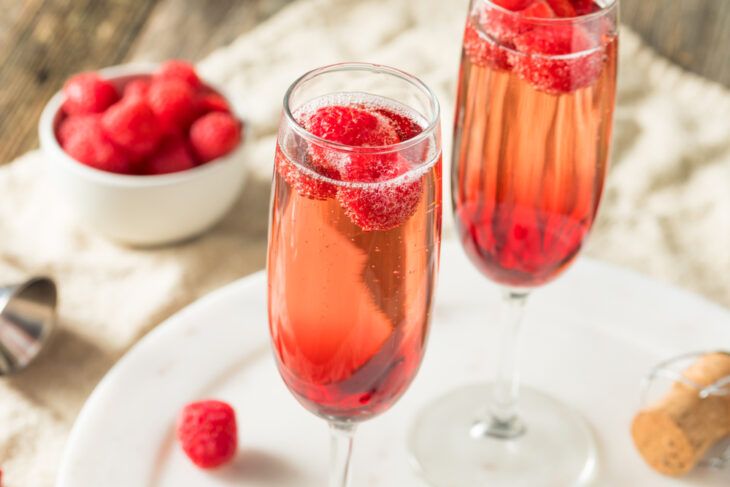 The Singapore sling is considered the official drink of Singapore by many residents and non-residents alike. First shaken in 1915, it was invented at a time when women drinking alcohol in public was frowned upon.

The Spruce Eats has a classic version of the recipe. This gin-based cocktail, which tastes every bit as good as it looks, calls for five ingredients plus a dash of club soda and two garnishes. It’s sweet, sour, and deceptively strong, with a lemon and cherry garnish that makes it the star of your at-home cocktail night. 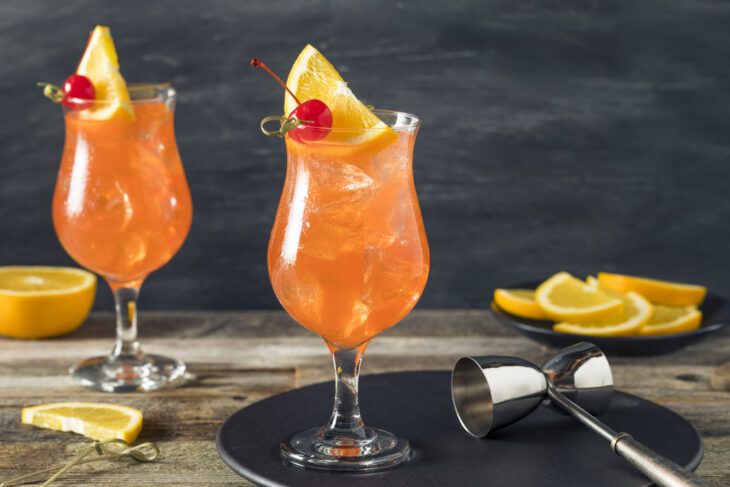 The woo-woo is a truly iconic 1980s New York drink, from the days when cocktails were experiencing a revival. The name is attributed to a bartender who shouted “woo-woo” every time the Mets scored, after which he gave a free round of the drink to patrons.

These days, you don’t have to be a baseball fan to give these drinks out to your friends. Celebrate a special occasion with this delightfully simple woo-woo recipe from BBC’s Good Food. 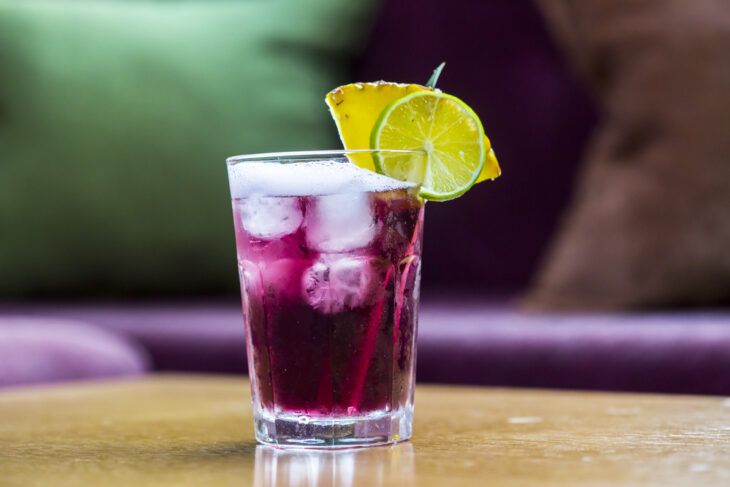 Last but by no means least is a party classic, the mojito. Easy to make and refreshing, the cocktail is believed to hark back to Havana, although some claim it’s been around since the 1500s. Despite having very few ingredients, the finished drink looks great and tastes amazing. Try this version by Love & Lemons.

If you or your friends are looking for a non-alcoholic alternative, swap out the rum for apple juice to enjoy a sweet-and-sour mocktail that rivals the original. 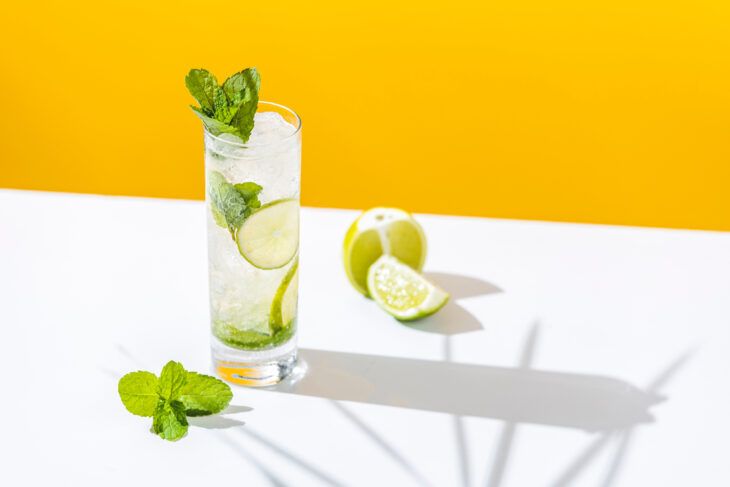