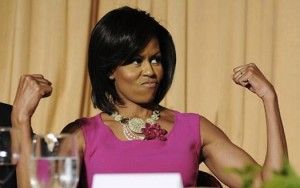 First Lady Michelle Obama has found a new forum in which to plug her activity-promoting “Let’s Move” campaign. Mrs. Obama is scheduled to appear on Dr. Oz on September 14, 2012, to discuss nationwide improvements to school lunch programs and changes to the Obama administration’s Presidential Youth Fitness Program.

Thanks in large part to the First Lady’s efforts, schools nationwide implemented revamped nutritional guidelines this past year, including fruit and vegetable content in school lunches, as well as a move to whole grain-based, lower-fat foods. Mrs. Obama is a prominent proponent of youth activity and nutrition programs and has served as the national spokeswoman for the “Let’s Move” initiative.

Mrs. Obama’s appearance on Dr. Oz was filmed on August 29, but its broadcast was delayed to coincide with the beginning of the new school year. During her appearance, she will also discuss improvements to the Presidential Youth Fitness Program.

Dr. Oz expressed his excitement for the interview by releasing this statement to the media:

“Mrs. Obama works tirelessly to focus our nation on prevention and educate youth about the critical need to eat right and stay active.  This message of prevention will imprint good habits on a generation of young people and result in longer lives and less disease.  I am humbled and honored that the First Lady will appear on our show to ignite this conversation with my audience,” said host Mehmet Oz, M.D.”

Will you watch Michelle Obama when she appears on Dr. Oz?