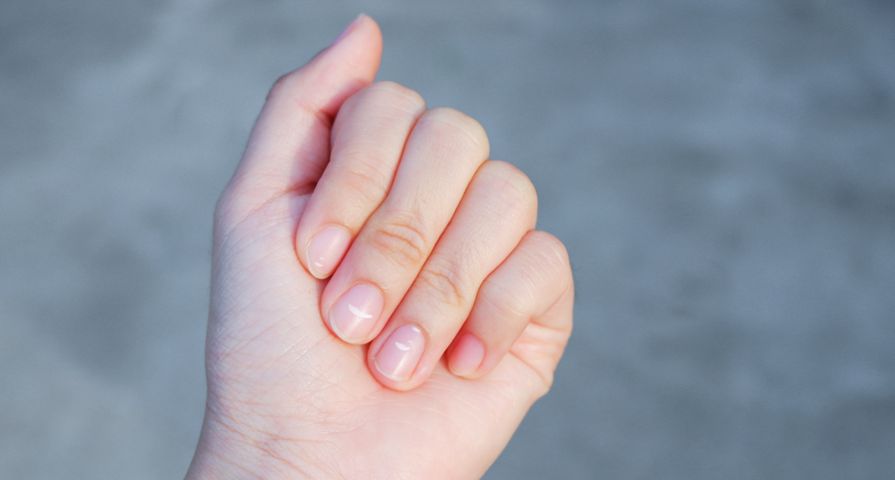 Must-Have Lotions for Treating Psoriasis
If you can’t quite put a finger on what’s ailing you, perhaps you should take a closer look at your fingernails. Your nails are actually a strong indicator of various health problems—some mild and some more serious, according to the Mayo Clinic.

Something like dirty fingernails probably just mean you need to maintain better hygiene. The telltale signs we’re talking about, are from the keratin formations near your fingertips. What happens here can be a clear indication of whether or not something is wrong. In some cases, it may even warrant a trip to the doctor. Here are 14 health-related problems that appear in our fingernails…

1. Small Pits on the Surface

The Mayo Clinic notes that “ice pick-like depressions” on your nails don’t necessarily come from you chewing on them. It is a condition also found in people that have psoriasis which causes dry, scaly skin.

The clinic also warns that pitted nails could mean you have a connective tissue disorder, such as Reiter’s dynrome or alopecia areata. Reiter’s syndrome is a tissue disorder which can have arthritis-like symptom among other indicators. Alopecia areata is an autoimmune disease that causes hair loss.

This condition is characterized by enlarged fingertips with nails that curve right around the edge. The U.S. Library of Medicine says there are some disorders of varying seriousness that clubbed nails may be characteristic of.

Some of the less-serious problems associated with nail clubbing are Celiac disease (a gluten allergy), an overactive thyroid, or dysentery (severe diarrhea with pain). However, the most common ailment associated with clubbed nails is lung cancer. It can also be caused by heart defects and lung disorders, such as cystic fibrosis.

Are your nails depressed in the center (enough to hold a drop of water in them)? The Mayo Clinic refers to this as “spoon nail” because of the resemblance. This condition can indicate an iron deficiency or too much iron in the blood (hemochromatosis).

While both of those conditions can be treated fairly easily, spoon nails can also point to more serious illnesses such as heart disease. Hypothyroidism (otherwise known as an underactive thyroid) is another possible cause that can leave you with fatigue and other symptoms.

Anyone who uses nail polish has probably seen their nails turn a tint of yellow at some point or another. This is normal and typically means that the nail polish was left on longer than it should. If the yellowing isn’t due to nail polish, it could be from a condition called yellow nail syndrome. “With yellow nail syndrome, nails appear thick and have a yellow/green hue,” says Dana Stern, MD, assistant clinical professor of dermatology at Mount Sinai Medical School when talking to SELF. “They frequently lack a cuticle as well as a lunula (the half moon at the base of the nail that is usually visible on the thumb and great toe).”

According to SELF, this means that the nail didn’t grow properly and is often a result of a lung condition called bronchiectasis or lymphatic disease. “Bronchiectasis is a condition in which damage to the airways causes them to widen and become flabby or scarred,” says Stern. ” It can occur as a result of an infection or a more serious condition like lung cancer that compromises circulation and stunts nail growth. “Because bronchiectasis tends to be chronic, yellow nail syndrome does too.”

5. Ridges Across Your Nails

These linear depressions that run along the width of your nail are also known as “Beau’s lines” (because it was named by French physician Joseph Honoré Simon Beau). The Mayo Clinic explains that these indentations occur “when growth at the area under the cuticle is interrupted by injury or severe illness.”

Beau’s lines is often associated with conditions like diabetes or peripheral vascular disease, as well as illnesses like scarlet fever, measles, mumps, and pneumonia, says the source. It can also be a sign that the person is suffering from a zinc deficiency.

Onycholysis is when the nail starts to come loose from the nail bed which leads to whiteness of the nail, explains Healthline. It can also develop a yellow or green tinge, says the Mayo Clinic.

Onycholysis is often a result of an injury (trauma) or infection, but it can also be a side effect of a particular drug or consumer product like nail hardeners. “Thyroid disease and psoriasis — a condition characterized by scaly patches on the skin — also can cause nail separation,” says the Mayo Clinic.

While we don’t want our nails to be yellow, we also don’t want them to be white. If the part of your nail closest to the cuticle is a solid white color and the part that’s furthest away from the nail bed is pink, then it’s called half-and-half nails, explains SELF.

“It’s also referred to as Lindsey’s Nails,” says Dr. Stern. Nails that appear as “half-and-half” could indicate there is something wrong with the kidney. It could even be a symptoms of kidney failure, says the source.

8. Nails with Black or Brown Stripes

Your nails shouldn’t have any kind of color on them, unless it’s from nail polish, of course. A black or brown stripe on their nail or any kind of pigmentation around the nail could mean that person has melanoma of the nail. “Melanoma is a type of cancer that most people tend to associate with the skin; however, melanoma can arise in the nail as well,” explains Dr. Stern to SELF. “The thumb, index finger and great toenail are the most common digits to have melanoma.”

If you notice that you’re showing signs of melanoma, don’t fret. While it should definitely be checked out by a doctor, Dr. Stern tells SELF that most of the time these pigmented black or brown bands end up being benign moles. It tends to appear more frequently in people with darker complexions because their skin and nails have more pigment producing melanocytes. “When the melanocytes are stimulated, usually through trauma to the cuticle (aggressive and repetitive cuticle pushing, cutting, picking, or biting), these cells begin to produce pigment, appearing as brown, lengthwise band in the nail,'” writes SELF.

“Treating the iron issue can help to normalize the nails,” says Dr. Stern to SELF. “Anyone who suddenly develops spoon-shaped nails should have a work up by their physician.” There is a possibility this nail change could also just be a normal result of aging, notes the source.

When someone injures their nail it often causes black markings to appear, such as a long, black, splinter-like line, says Men’s Health. In this case the answer to why these markings are showing is simple, it’s a result of the injury. But if you can’t think of a time when your nail would’ve been injured, then it could be due to something completely different.

Men’s Health also talked to Dr. Stern who says these splinter-like hemorrhages could mean the person has “bacterial endocarditis, an infection of the valves and inner lining of the heart.” This condition usually stems from a dental or medical procedure. It can be treated with antibiotics.

Ever noticed a white spot on your nails? The common misconception about these white spots is that they indicate a calcium deficiency, but this actually isn’t the case, says Health.com. “Usually, those white spots are not very significant,” says John Anthony, MD, a dermatologist at the Cleveland Clinic in Ohio to the source. “They’re often the result of minor trauma, such as if you whack your finger against something, and aren’t generally to do with calcium.”

If so, try pushing on the white spot to see if it fades. If it doesn’t fade it’s probably a mark from true leukonychia, says Men’s Health. This white discoloration is from an injury to the nail or an infection. In some rare cases it can be a sign of arsenic poisoning, says Chris Adigun, MD, a board certified dermatologist and nail specialist in Chapel Hill, N.C., to the source.

If you notice this problem on your nails, have a doctor check it out to see if it needs to be treated for an infection.

Similar to white spots, Mee’s lines show up as transverse white lines that run horizontally across the nail. According to Healthline, Mee’s lines are a sign of arsenic poisoning. “If you have this symptom, your doctor will take hair or tissue samples to check for arsenic in your body,” writes the source.

Terry’s nails is somewhat similar to Lindsey’s nails as they both cause the nails to appear white. In the case of Terry’s nails, the nail will look white except for a narrow pink band at the top, says the Mayo Clinic.

For the most part, Terry’s nails is simply a normal side effect of aging, but it can also be a sign of an underlying health condition like liver disease, congestive heart failure, kidney failure, or diabetes, warns the source.

We all know one person who used to (or still does) chomp on their nails incessantly. Most people grow out chewing their nails, but this bad habit can be extremely hard to break.

For those who can’t seem to quit, it can be a sign of obsessive-compulsive disorder. “Sometimes psychiatric medicine is required to treat OCD-related nail biting,” says Debra Jaliman, MD, a New York City-based dermatologist and author of Skin Rules when talking to Health.com. “A bitter-tasting compound that’s polished onto the nail can help, too.” 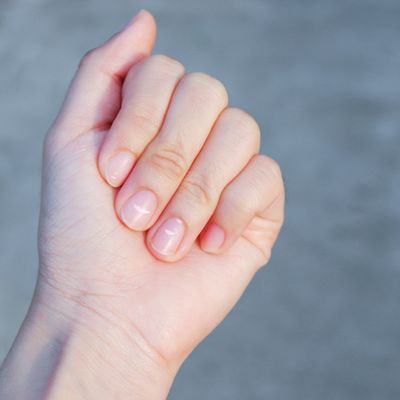