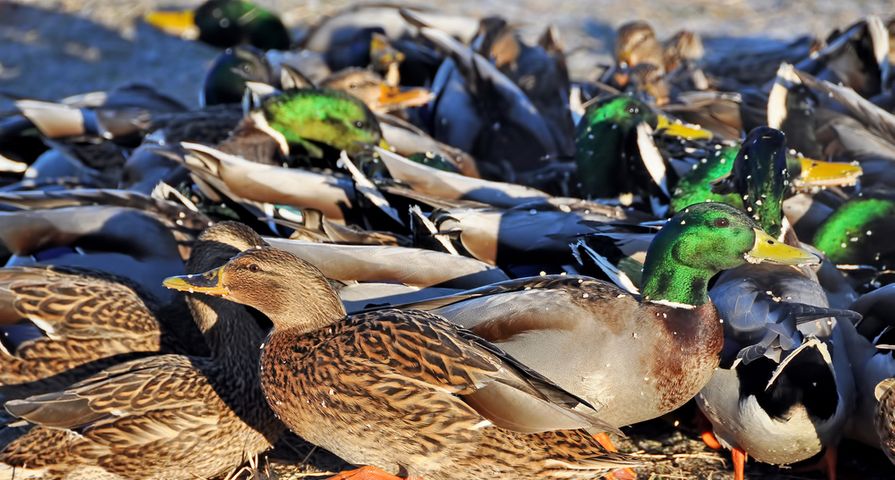 China, US, India Top List of World's Worst CO2 Polluters
I like to take my morning runs around a scenic, little park in my hometown. This park is home to a pretty large lake, so naturally, tons of ducks, geese, and the odd heron have set up residence. People naturally congregate here as well—to walk their dogs, to run, to cycle, and to feed the birds all sorts of bread, table scraps, and even popcorn—despite several signs posted that ask visitors politely to, “Please refrain from feeding the waterfowl.”

Before you toss your day-old crusty bread to the ducks, the New York State Department of Environmental Conservation would like you to know that what you see as “helping the ducks” is actually doing them more harm than good.

Ducks and geese are meant to eat a variety of natural grains, aquatic plants, and invertebrates, which are high in the types of vitamins and nutrients they require. However, bread and popcorn are full of empty calories (and mostly void of protein), which can cause malnutrition, drooping wings, and weight gain.

When humans feed ducks and geese on a regular basis, it creates an artificial feeding ground that waterfowl become dependent upon. For instance, you’ll notice when feeding a large group of birds that the larger ones compete better for food.

This also leaves younger ducklings and goslings unable to compete for scraps and prone to starvation and losing the ability to fly. Most ducks and geese forage by ducking their heads to pull plant life from the bottom of ponds and lakes. However, if waterfowl become dependent on handouts from humans they also never learn to forage on their own.

Another drawback of creating a group an artificial feeding ground where waterfowl become dependent on humans to feed them is delayed or stalled migration patterns. You’ll notice in public parks where ducks, geese, and other birds are accustomed to being fed, birds will migrate later and later until they stop migrating altogether.

Why would ducks and geese fly south when they’ve come to expect the bread buffet to continue? As more and more waterfowl opt to stick around during the winter months, they become prone to starvation and freezing in sudden cold temperatures.

If you feed your green, moldy bread to ducks and geese at the park, you could be introducing them to dangerous diseases, like lung disease, severe bacterial illnesses, and even death.

Representatives at the New York State Department of Environmental Conservation caution that when ducks and geese are fed a scattered meal of bread—they eat in the same place they poop, creating an unsanitary and overcrowded environment prone to diseases not typical in the wild—such as Spergillus, Avian Botulism, parasites, and Duck Virus Enteritis. Many of these diseases and parasites can also live in ponds and infect humans.

5. Dangers to the Environment

In addition to causing great harm to ducks, geese, and other birds, an artificial feeding ground can also pose a grave danger to the surrounding environment. Steve Carr, a Biologist at Memorial University of Newfoundland’s Laboratory Department of Biology, points out that unconsumed bread and table scraps will typically sink to the bottom of a nearby water source and rot, leading to all types of bacteria.

Overcrowding of birds defecating in one area can also damage water quality, cause algae blooms, increased Ecoli levels, and parasitic diseases, like Swimmer’s Itch, which can be transmitted to humans.

Aggressiveness in geese and swans is largely thanks to well-meaning visitors with an old slice of bread or a few French fries to share.  Dependent on these nutritionally void handouts, birds become sick, starving, and aggressively compete with other birds for food. Many will even resort to aggressively attacking humans, including children, because they’ve come to associate humans with food.

7. Food for the Birds

The best thing you can do to help the ducks and geese in your local park is to STOP feeding them. Although some biologists claim that wild bird seed is fine to scatter once in a while, artificial feeding of any kind creates an unnatural dependency that threatens waterfowl.

Do your part to share what you’ve learned and educate others on the negative effects of artificial feeding in natural habitats. Don’t worry, the birds will stick around even if everyone stops feeding them. Instead, learn to enjoy ducks, geese, and swans for visual enjoyment.

10 Simple Ways to Cut Down on Food Waste