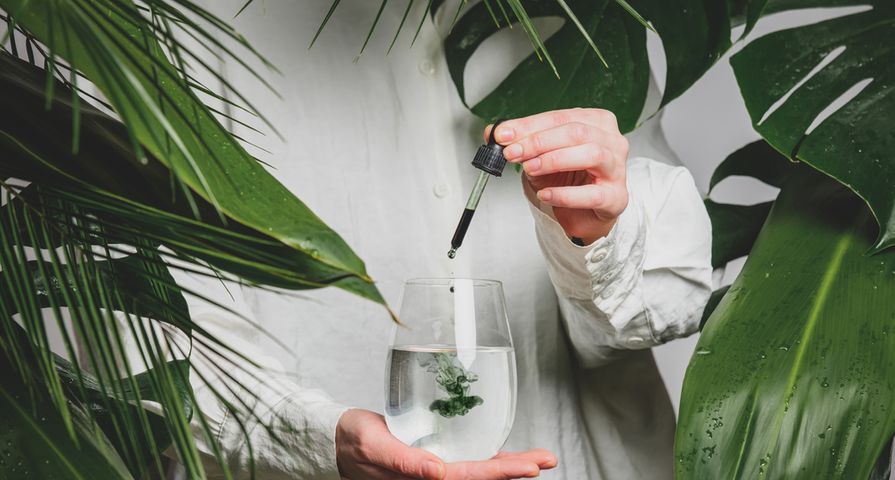 You probably remember learning about chlorophyll in science class during grade school: it’s the stuff that makes leaves (and some vegetables) green. However, there’s more to it than you might have previously thought – including the health benefits of consuming it.

For example, the green pigment found naturally and in supplements can potentially boost your energy and help fight off sickness, according to Medical News Today. Let’s explore more details about chlorophyll, and whether to consider adding more of it to your diet…

This pigment present in green plants is important to ensure plants get the nutrients they need. However, plants also need sunlight for this mechanism to work. In other words, chlorophyll helps plants get energy from sunlight (a process known as photosynthesis).

WebMD notes that there are two types of this natural compound (type A and B), and they’re both fat-soluble (meaning consuming it with some healthy fats during a meal can help your body metabolize it). The source also notes the compound is a natural antioxidant, which is associated with disease prevention.

WebMD notes that the health benefits of consuming chlorophyll are still in the early research phase. However, it points to studies that suggest the compound reduces the occurrence of cancerous tumors in rodents. It does this by binding to cancer-causing chemicals known as aflatoxins, preventing them from being absorbed.

The source notes much of the related research centers around the benefits of chlorophyllin, a chemical derivative of the natural compound. However, it also points out that early research with human subjects suggests taking 100-milligrams (mg) of chlorophyllin – 3-times daily for 4-months – reduces the amount of damage to DNA from aflatoxins by more than 50-percent.

It Could Help Reverse Anemia

Hemoglobin is essential to help move oxygen around your body. Medical News Today says that chlorophyll is actually “chemically similar” to hemoglobin in red blood cells, and therefore could help combat deficiencies of this protein.

More specifically, the source notes that wheatgrass juice – which is loaded with chlorophyll – could be an effective way to treat hemoglobin disorders including anemia, which can leave a person feeling weak and tired without excessive activity.

It May Act As a Weight Loss Agent

Healthline says there is “very limited” research into how liquid chlorophyll (a supplement) can aid in weight loss. It points to a 2014 study of 38 females that suggests those who took a daily “green plant membrane supplement” (which included chlorophyll) helped one of the groups lose more weight than the other who did not take the supplement.

The research report itself states that the green plant supplement “induced weight loss” in women after 90-days. The study highlights also point out that these supplements reduced the urge to eat “sweet and fat” foods from day 1.

Potential As a Natural Body Deodorant

Medical News Today explains that researchers have been looking into the natural deodorizing properties of chlorophyll for “many years.” It traces back to a 1960 study that suggested the compound could reduce odors associated with a colostomy, which is sometimes required following a colectomy procedure. It also says these findings were contradicted by a 1989 study.

However, in a 1980 study also cited by the source, it was suggested that chlorophyll might help reduce body odor among those living in nursing homes. The abstract notes that in a group of 62 geriatric nursing patients, chlorophyllin tablets were “found to be helpful in controlling body and fecal odors” while also reducing excessive flatulence.

An abstract on the National Library of Medicine suggests phytol, a component derived from chlorophyll, might be effective in reducing inflammation as well as “painful inflammatory diseases” such as arthritis. The abstract explains that phytols can be effective in reducing “proinflammatory” cytokines, which play a “pivotal role” in cases of arthritis.

While it points out that the mechanism behind phytols achieving this reduction of inflammation is “poorly understood,” it says a mouse model showed less joint swelling and other related markers during treatment. Other sources note that the benefits of chlorophyll for easing arthritis and even fibromyalgia require more research.

It Can Help Heal Wounds Faster

When used on the skin (topical) instead of ingested, there’s some evidence to suggest chlorophyll can help heal wounds, according to Very Well Health. Apparently, this application for wounds has been studied as far back as the 1950s, and some healthcare professionals prescribe it.

The source also notes there have been some pilot studies to find out if topical chlorophyll can benefit people in other ways – including tackling acne, with some success. Apparently, it might also be effective in helping to reduce “photoaging,” which is aging from sun exposure.

Where Do I Find Chlorophyll Naturally?

There are several natural sources of this green compound you can readily find at the supermarket. For example, according to Very Well Health, chlorophyll-rich foods include arugula, spinach, broccoli, asparagus, parsley, and seaweed. Dark-green leafy veggies are often rich in the compound, the source adds.

However, the source notes there are other ways to get your fill of chlorophyll other than leafy greens. It lists pistachios and hemp seeds as other options. It also notes that even some fruits such as apples, kiwi, and green grapes can provide some of this compound.

It Can Also Be Found in Supplements

Chlorophyll can also be found in pill or liquid form. Cleveland Clinic notes there has been an increase of people adding drops to their water to get the health benefits, thanks to popularity on social media.

Even though it has gained popularity, is the liquid form safe? According to research cited by the source, there hasn’t been any evidence to suggest it’s not.

Mild Side Effects You Should Know

Even though no evidence suggests it isn’t safe, the source notes there can be some mild side effects from using liquid chlorophyll (which is actually a “semi-synthetic” mixture of sodium copper salts, known as chlorophyllin).

Cleveland Clinic explains some people might experience some mild gastrointestinal issues – as well as green poop that might be alarming to some. The risk of burns from sun exposure might also increase, it adds.

Is Chlorophyll Right For Me?

While there are many potential health benefits of chlorophyll, and some people report feeling better after adding more of it to their diet, “the evidence for most of these is insufficient and more research is needed,” notes Medical News Today.

When it comes to chlorophyll supplements, there are several different types on the market that vary in strength, notes Medical News Today. It suggests that while many of these supplements have specific instructions about how to use them, you’ll want to turn to a doctor or nutritionist for guidance first.

Who Shouldn’t Use Chlorophyll?

There is also a possibility that chlorophyll could negatively interact with certain medications. This is why it’s always crucial that you check your doctor before starting a new supplement.