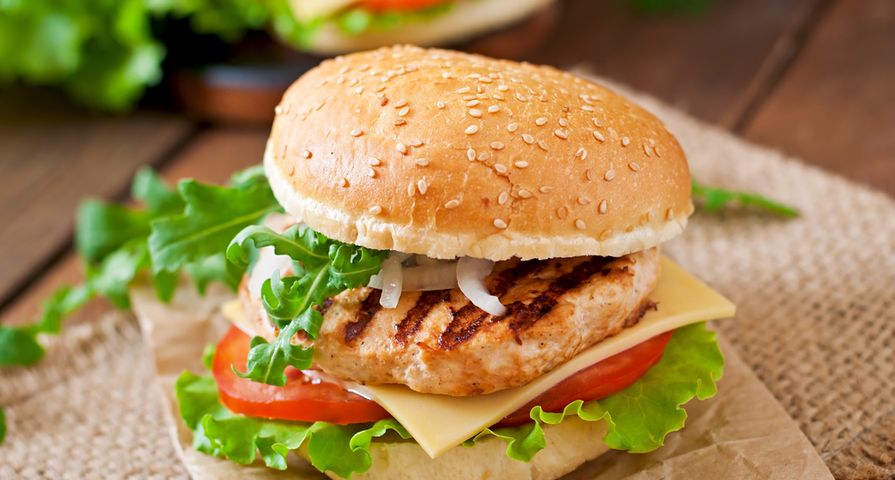 Is there really such a thing as ‘healthy’ fast food? In these times of hustle and bustle there are often not enough hours in the day, and as we’re pressed to fit in what we can, we often have to sacrifice here and there. Cooking at home is often one of the first tasks to get ‘outsourced’ so to speak as many of us routinely visit the drive-thru either on our way to work or on our way home to pick up some dinner on the fly.

Traditionally, fast food has been about notoriously unhealthy offerings like burgers, fries and pizza but as more people are concerned with eating a healthy balanced diet, fast food retailers have had to come up with some new ideas to offer a fresher, healthier menu. But are these products really all they’re cracked up to be? And are they actually as healthy as they claim to be? Sometimes the nutritional labels say otherwise… as is the case with these eight popular menu items that aren’t actually very healthy at all…

We’re not sure how many people would actually go to Burger King and order a veggie burger (most people who visit are probably looking for a real burger) but if you do order one thinking that it’s going to be a healthier choice than your usual Whopper sandwich, think again.

While BK’s veggie burger does have almost half the calories of the signature Whopper sandwich, it has almost the same amount of sodium, 900-milligrams compared with the Whoppers 910 milligrams. That’s almost 40-percent of your recommended daily sodium intake in one little burger. So just remember, lower calories doesn’t always equal a healthier option.

With so many people concerned with gluten, wheat and grains, salads are a popular alternative to traditional sandwiches and subs. And without that bread, you probably feel like you’re making a healthier choice, which could be true… but it’s always important to know the facts. In the case of Quiznos Honey Mustard Chicken Salad, things appear pretty healthy, especially since the full size salad only contains 290-calories, but things take a turn for the worse when you examine the sodium.

This salad contains a whopping 1130-milligrams of sodium before you even add the dressing (which increased it by another 330-milligrams), that’s half your recommended daily sodium intake according to The Dietary Guidelines for Americans or 75-percent of it if you’re over 50 years of age.

Packed with fibre and protein to keep you feeling fuller for longer, oatmeal has become a nutritious and popular choice for breakfast. If you don’t have time to make it at home yourself, many fast food retailers are offering their own versions but it’s important to know the nutritional facts so you can decide if it’s really a healthy option or not.

Dunkin’ Donuts original oatmeal comes with a dried fruit topping and sounds like a healthy option, especially since the restaurant put the item on it’s “DDSmart” menu of healthier offerings, but a closer examination of the facts shows this item contains 22-grams of sugar in its relatively small serving size. Not exactly the healthiest of starts to your day.

McDonald’s is another fast food retailer that has held its fair share of the morning breakfast market for a while now with their signature egg mcmuffin as their most popular offering. In an attempt at producing a healthier breakfast offering, McD’s introduced the egg white delight mcmuffin which has no egg yolk and Canadian style bacon. And while this sandwich offers a filling 17-grams of protein and 50 fewer calories than the original mcmuffin, the creators clearly forgot to take a look at the sodium.

The egg white delight actually has more sodium, 740-milligrams compared with the 730 in the original sandwich. We’re not sure how that is possible but if you do choose this sandwich just make sure you watch your sodium intake for the rest of the day as you’ll have already consumed over 30-percent of your recommended amount.

We all remember Jared the subway guy, while he’s seen his fair share of legal troubles in recent days he remains most popular for losing a dramatic amount of weight on what he called “the subway diet.” Subway restaurants were some of the very first ‘improved’ fast food choices and still market many of their sandwiches as healthy options. Like the 6-inch sweet onion chicken teriyaki sandwich which is on the restaurant’s 6-grams of fat or less menu.

While this signature sandwich may lack fat and overall calories (it has only 4.5-grams of fat and 370-calories) it certainly doesn’t lack sugar with a shocking 16-grams per sandwich. Consider if you had a full size 12-inch version you’d be consuming 32-grams of sugar. Now, that’s just scary.

Chipotle has been on the fast food scene since the 90’s but has grown exponentially in the last 10 years as more and more people crave their fresh take on a Mexican grill. One of the most loved features about this chain is their completely customized menu. You can choose exactly what you do, and don’t want, allowing for the customer to make healthy choices when they want like skipping the full fat cheese and sour cream.

But Chipotle also offers some healthy menu suggestions if you’re out of ideas like their Sofritas Salad, which contains romaine lettuce, sofritas, white rice, black beans and fajita vegetables. Sounds pretty healthy, and it only contains 505 overall calories, but a look at the sodium levels will leave you wide-eyed. This ‘healthy option’ salad contains 1330-milligrams of sodium, which equals almost 58-percent of your daily recommended amount, or over 88-percent of your recommended daily intake if you’re over age 50.

Chicken has always been a lower fat and more heart healthy option over beef so choosing a chicken sandwich over a traditional beef burger isn’t a bad idea, however it’s important to check those nutritional facts so you know exactly what you’re eating.

Wendy’s markets their ultimate chicken grill sandwich as a healthier option and while it’s a better choice than a beef burger or breaded chicken sandwich with only 340-calories and a filling 32-grams of protein, it still ranks pretty high in the sodium department with 950-milligrams per sandwich. I guess there’s always a down side when we’re talking about fast food.

Panda Express has been offering tasty Chinese favourites that you can enjoy in a hurry for years and their ‘Wok Smart” menu indicators are designed to steer you away from their fried foods and towards healthier choices like their broccoli beef entree which sounds healthy enough.

One 5.4-ounce serving contains only 150-calories and 7-grams of fat, however it does contain 520-milligrams of sodium and 7-grams of sugar per serving. That’s a considerable amount of sugar and salt, especially considering that most people don’t eat just one serving for their meal and it’s usually paired with some rice or noodles.